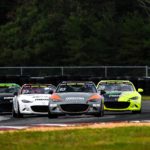 October 13, 2020 – Maverick – Hixon Motor Sports continued their upward trend this past weekend at the New Jersey Motorsports Park for the penultimate round in 2020 Battery Tender Global MX-5 Cup Presented by BF Goodrich. Closing the weekend with four top ten results including a fifth-place finish in the second and final race of the weekend, both team drivers were able to continue their progress and finish the weekend with their best results of the season. 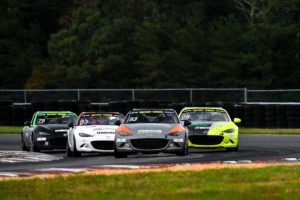 Justin Piscitell led the way for Maverick – operated by Shea Racing in qualifying with an impressive sixth place result finishing .3669 behind the eventual pole position winner. With the top ten separated by only a second, Bryan Hixon was the eleventh fastest competitor of the session as the pair looked forward to the wheel-to-wheel action over the weekend.

While Hixon ran into trouble in race one and was forced to pit for a mechanical issue, the Maverick crew was able to quickly repair the #63 entry and get him back out on track to claim a fourteenth-place result. Piscitell battled in the top ten throughout the twenty-nine-lap race as he flirted with a top five result before crossing the line in seventh and a solid end to the first race of the weekend.

Race two on the weekend was much better than the previous one as both drivers were able to secure top ten performances. Piscitell put his #9 Mazda MX-5 in the fifth position while Hixon drove into the top ten, claiming a tenth-place result as the pair gained results and momentum as they look forward to the next round.

“It has been a good season and to continue to garner better results and have strong performances with each passing weekend is rewarding,” added Shea Holbrook. “A huge congratulations are in order for both drivers as crew as they continue to push hard and strive for success. Can’t wait for the next one.” 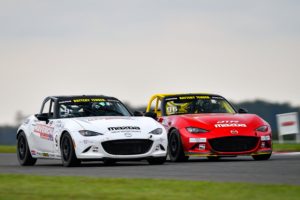 “Really excited to score our second top five this season,” explained Piscitell. “The whole Maverick team has been putting forth their best efforts every event and we continue to grow and make progress as a team. I am very happy for Bryan achieving his goal of getting a top 10 in his first season back. I am looking forward to carrying this momentum forward to the finale at St Pete in two weeks!”

With little time off, Maverick will return to the track next weekend for the final round of the 2020 Battery Tender Global MX-5 Cup Presented by BF Goodrich at the Grand Prix of St. Petersburg. Taking place over the October 23 – 25 weekend, Piscitell and Hixon will aim to close the season strong and bring success to the Maverick – Shea Racing program.