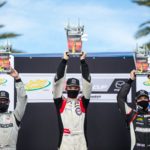 October 31, 2020 – Maverick – Hixon Motor Sports Justin Piscitell ended his Global MX-5 Cup Presented by BF Goodrich season on a high note with a third-place podium result last weekend at the Grand Prix of St. Petersburg. Trending upward throughout the 2020 season, the Maverick program secured their first podium of the season at the final race boosting the team’s momentum heading into the off season and onwards into 2021. Additionally, Justin’s climb to the podium netted him Hard Charger honors for race two in St. Pete.

After qualifying in the twelfth and thirteenth positions at the barrier lined temporary circuit, Justin Piscitell and Bryan Hixon improved in the first wheel-to-wheel action on the weekend. Becoming more comfortable with the daunting concrete walls the outlined the 1.8-mile circuit, the goal of completing full race distance and gaining more experience was achieved.

Race two on the weekend was a perfect way for Maverick – Hixon Motor Sports to end their season garnering the best result of 2020. With Piscitell driving forward nine positions and battling at the front of the field, the rising team and driver secured a third-place result on celebrated on the podium. Hixon throughout the season made massive strides earning as fast as race pace the last two events after taking a five-year hiatus from racing. Hixon celebrated with his team and was happy with the progress of the team throughout their rookie season.

“Closing out the year with a third place and earning the Hard Charger is a pretty awesome way to finish the season,” Piscitell said. “Global MX-5 Cup teams know the how much work you have to put in behind the scenes. I’m hugely impressed with Maverick’s efforts and continued success rate this season as a new team with new cars. We had been getting better every race and we kept working hard. I have to thank team owner, Bryan Hixon for this amazing opportunity. I’m forever grateful for his confidence in me and providing one of the best programs I’ve been a part of. Our team manager Shea Holbrook runs a top-notch program alongside being a mom trackside is impressive. My crew chief and the whole crew over at Maverick – I can’t thank enough for all their hard work.” 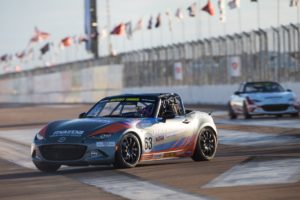 Performance on track isn’t the only attribute recognized by the Global Mazda MX-5 Cup, a team’s professional appearance and attitude were also recognized. The VP Racing Fuels “Clean Image Award” is given to the team that best demonstrates these qualities, and this year it went to Maverick, owned by Bryan Hixon and managed by Shea Holbrook.

“Truthfully, I couldn’t be more excited and pleased with our progress this season and what a way to end the year,” added Team Owner Bryan Hixon.” Joining IMSA on a seven-race weekend season kicking off at the Daytona 24 Hour speaks volumes to Mazda’s level of commitment to continuously creating opportunities for teams and drivers to showcase and compete on some of the largest sports car weekends.”

“With the Mazda Scholarship Shootout approaching (November 15-16) we congratulate all applicants and wish them success,” expressed Holbrook, who is familiar with shootout style competitions landed herself one of two American spots on the inaugural W Series grid in 2020. “We also are open to providing any of our team resources to help prepare and elevate those drivers for this incredible opportunity.” 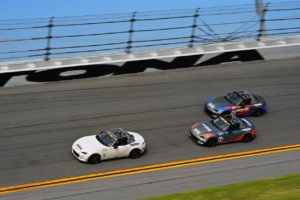 “We were very pleased with both ladies preparation, pace throughout the day, adaptability and professionalism,” said Hixon, team owner. “Given this opportunity I think they’ll be that much more prepared for the intensity of the shootout.”