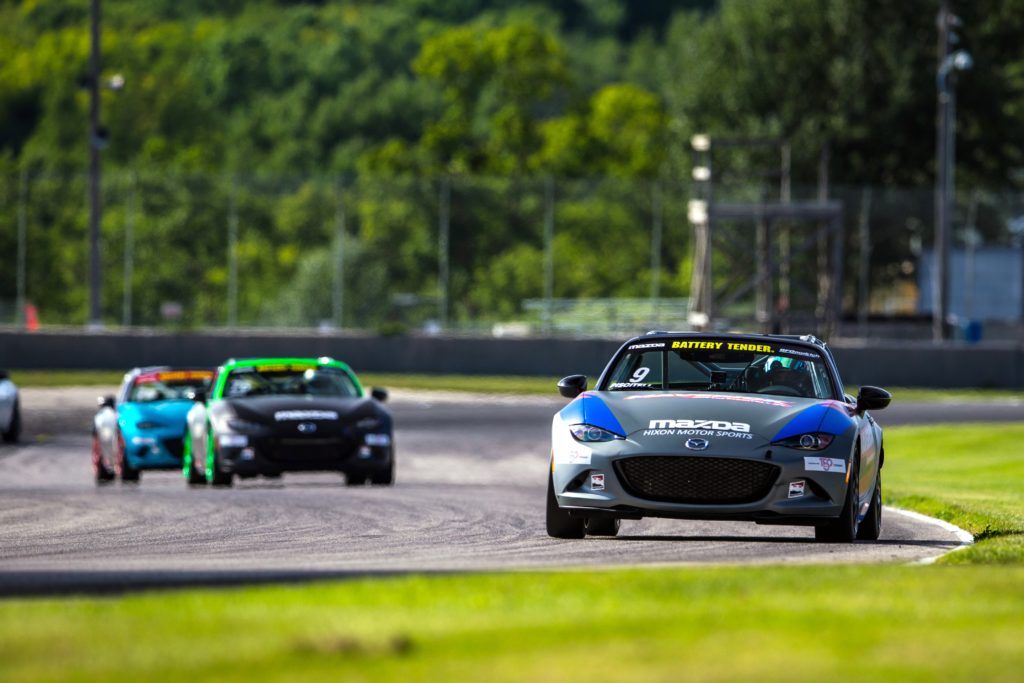 The Spec MX-5 Challenge Championship took place at the challenging 20-turn F1 circuit, Circuit of the Americas. Justin Piscitell, running under his livery, DAMG Racing, took pole for Race 1, with a time of 2:34.470 in a 17-car field.

Race 1 was delayed and shortened by a mile-long oil drop in the previous race, setting up a dash for the championship lead. Piscitell got an excellent start, as did teammate Tyler Quance; after Turn 1, the two were in the lead followed by Aaron Jeansonne, a strong competitor to Piscitell all season. Due to oil down in Turn 12 causing an incident between the three leading cars, Piscitell lost the lead and ultimately finished sixth place.

Piscitell was down 5 points from the championship before taking the green flag from pole position. After an electrifying battle with Quance, Piscitell secured the championship by winning Race 2 with only a one-point lead over Quance.

“What a way to end the season! It was down to the wire on the final lap and the last corner. I am so grateful for everyone at the Spec MX-5 Challenge, David Cook from Mazda, and my fellow competitors that marked this experience a milestone I’ll always remember,” said Piscitell.

Bryan Hixon, owner of Hixon Motor Sports and 2020 #63 Maverick driver, is extremely proud of his teammate as well as professional coach, Justin Piscitell, in the 2020 Global MX-5 Cup season-end success that earned the team’s first podium and second hard charger award to close out the season and finishing off 2020 as the Champion of the Spec MX-5 Challenge. “Justin was instrumental not only for my return to racing but also for the team’s continued success throughout the season. As a new team in the paddock this year, we worked on racecraft development and strategies for success, and on car setup, and on focus and consistency, and to many things of which we could not have done without Justin’s expertise, experience, professionalism, and positive down-to-earth friendly communication style,” said Hixon.

“The Mazda platforms from Spec Miata and Spec MX-5 Challenge to Global MX-5 Cup provide clear steppingstones for Hixon Motor Sports. It is our goal to compete, develop and foster drivers and relationships that will yield repeatable success and growth under our banner. I believe we are positioned very well to achieve these objectives, especially in the near future.” said Holbrook.

Hixon Motor Sports (HMS) looks forward to the 2021 Global MX-5 Cup season as they will be announcing new investments in the crew, the drivers and customers, the new website and marketing, and the new partnerships with the HMS team in the near future. One of our goals for 2021 is to run a four-car team and maximize the marketing opportunities for our drivers, so please contact Shea Holbrook if you would like to learn more about what HMS has to offer with on track and off track support. Inquiries can be sent to shea@shearacing.com or (352) 267-2594.