Shea Holbrook’s strengths are not limited to her on-track abilities. In fact, her high-energy, keen eye for value, calculated risks and business expertise has created even greater value in her professional racing career.

Shea Holbrook has developed an aptitude for business and entrepreneurship which demands the same level of risk and ferocity as racing. Recognized by motorsports industry veterans and respected business leaders around the nation, she knows what it takes to build successful partnerships and businesses.

The 7-Time Pirelli World Challenge winner now races in the GT rank where she recently competed full-time in the 2017-2018 IMSA Lamborghini Super Trofeo Series. Shea in 2019 earned a seat in the W Series, a unique ground-breaking free to enter European single seater motor racing series for women drivers only. A shootout style competition initially starting at 60 drivers was narrowed down to 18 Holbrook earned her elite spot of the grid driving the No.67 chassis for the inaugural season representing just one of two Americans.

Shea successfully cultivated and executed several business-to-business opportunities along with corporate partnerships and sponsorships throughout her 10+ year career. Before 30 years of age she built a multi-car racing team, Shea Racing in which she managed from 2010-2017 and now manages Maverick by Shea Racing, a newly formed Global MX-5 Cup team owned, by racing driver and philanthropist, Bryan Hixon.

Taking her passion for racing and drive for business Holbrook mavericked her self-made career. She went on to have standout moments as she was inducted into the Guinness Book of World Record’s with Denise Kornek for their Paced Bicycle Land Speed Record of 184MPH in 2018. In 2019, Holbrook was a part of the global launch of the all-new electric Porsche Taycan piloting the car on the U.S.S. Hornet aircraft carrier from a 0-90-0MPH wheel gripping test. Her first mark in history was when she won the 2011 Long Beach Grand Prix becoming the first female to win a major Touring Car race at the prestigious venue. 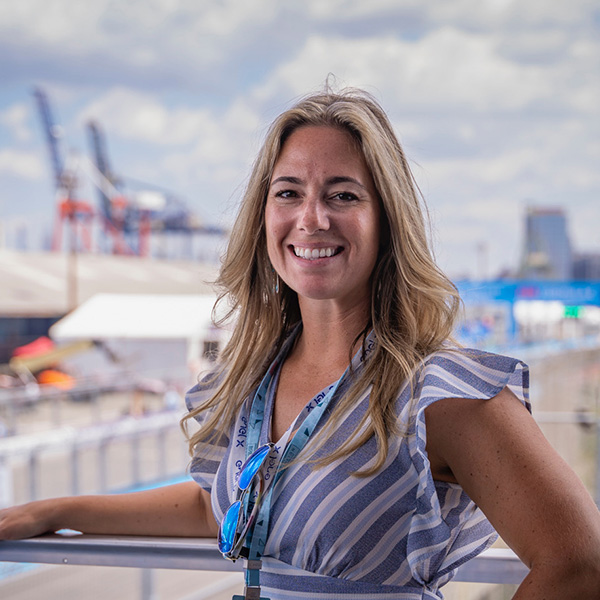 In April of 2020, Shea and her husband Nick welcomed their first child, Olivia making the season that much more exciting.

Shea’s charisma is infectious – some have said her ability to adapt and relate to anyone on a genuine level has aided in her overall success. This has created opportunities for Shea to share her passions and experiences through speaking engagements and mentorship programs.

Shea has been recognized by the Women’s Sports Foundation as a leading Women in Motorsport and sits on their Athlete Advisory Panel. Her community outreach includes advocating for Duchenne Muscular Dystrophy as it affects her family.

She’s received media attention from outlets such as espnW, Yahoo, the Wall Street Journal and Autoweek.